I would like to welcome you to the first edition of FIND, STOP, CURE MS

I hope you will find this informative and thought provoking. I hope to amplify the various issues highlighted here in future editions.

Autoimmunity is the culprit

There has been much confusion about the cause of MS in particular (even in the neurology and research community) – which is understandable given that we don’t have absolutely definitive data about the disease (like just about every other disease!). This confusion should really not exist, as we know as much about MS as we do about other autoimmune disorders – which I strongly believe is the underlying cause of MS. What I will list below is not just a personal bias but commentary based on solid scientific evidence we already have. I do not believe there is any evidence for any other cause of MS other than autoimmunity – i.e. chronic viral infection, toxins etc.

First, much of the clinical facts surrounding MS might seem difficult to comprehend. What do we make of these facts?

All tissue-specific autoimmune diseases have a fundamental impairment in regulatory T-cell control of immune responses to what are called tissue (self) antigens (something seen by immune cells) – usually proteins. While the mechanisms leading to each of these diseases and the proteins inciting the immune response differ, there are many similarities between these conditions, and in fact some individuals may end up with more than one immune condition – e.g. MS and Hashimoto Thyroiditis or Crohn’s disease. We have an enormous amount of information about the processes which might lead to the development of an autoimmune disease in general. However, much of the information is based on animal work and this has not translated readily into truly understanding what happens in human disease. After all, we are 70M years apart from the evolution of mice and rats, and 7-10M years apart from other primates! We have at least 350 genes which mice and rats do not have (most in the brain and immune system) – and unlike these animals, which have roughly the same number of genes (about 25,000), we regulate the translation of our genes into at least 100,000 different proteins using a mix and match of different combinations of the components of our genes. So it should not be surprising that we differ in terms of our makeup as well as the diseases we unfortunately get. Mice and rats rarely develop autoimmune diseases spontaneously the way we do. In fact the conditions leading to autoimmunity have to be artificially induced in genetically unique animals – as against the genetically outbred creatures that we are (who sometimes unfortunately get an autoimmune disease).

SCIENCE IN THE CONTEXT OF MS

So what DO we make of all of this in the context of MS?

Our immune system has developed primarily to help prevent / help us recover from infection, to minimize tissue damage in this setting, as well as to police our cells to prevent the development of cells such as cancer cells. To accomplish this, immune cells (called adaptive immune cells) have to be able to recognize what are our own tissues and their protein components (self-antigens) and to be able to distinguish the normal situation from either an infected or cancerous cell. (When this delicate balancing act goes awry autoimmunity results where the immune system attacks an otherwise normal tissue). The adaptive immune system which accomplishes this task (as against other forms of protection called innate immunity) comprises two similar but different cells – T and B cells. I will focus on T cells, not that B cells are unimportant and potentially involved to some extent in MS, but because an imbalance in the T cell response is most likely central to what is going on in MS. 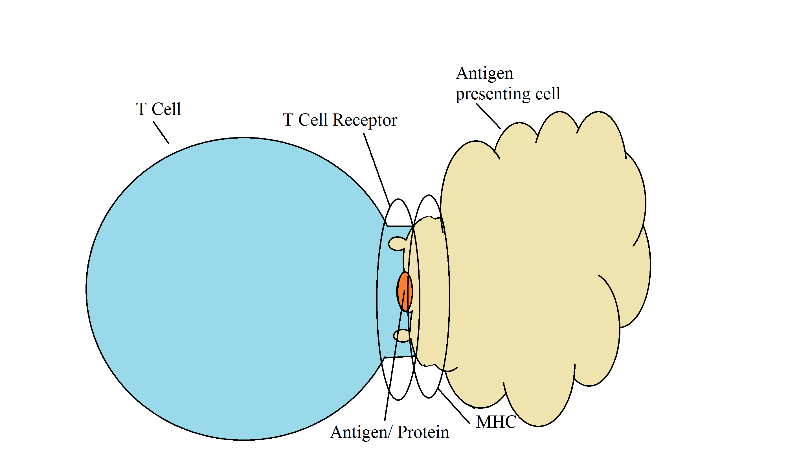 As we develop in utero and for our first 20 years of life our immune system develops a strategy to accomplish what has been mentioned above. Cells that develop into T cells go from the bone marrow into the thymus. As a result of a multi-step process, cells that recognize our self-antigens to some extent but not too much, evolve. Part of the wide variability in the process of seeing self is determined by the genetic variations in a receptor on other cells which presents the antigens to T cells (the MHC or major histocompatibility complex – which we know in the context of tissue typing for transplants – and where variations in these molecules are genetically determined and produce 40-60% of the risk of getting MS). Other cells with too high or too low a response die off. The remaining T cells also develop millions of variations in their antigen recognizing receptors (T-cell receptor) so that there is the potential to recognize an unlimited number of foreign antigens. The death or inactivation of T cells in the thymus which could harm ourselves through a response to self-antigens is called “recessive immune tolerance”. The remaining T cells then develop a broad divide into cells which can recognize and respond appropriately to challenges (T effector cells) and cells which can then regulate their responses – regulatory T cells, which produce an ongoing form of immune surveillance called ”dominant immune tolerance”. Thus, we “see ourselves” just enough, as well as recognizing something foreign in the context of our own tissues as a result of this process. The thymically-generated regulatory T cells have a long-lasting effect; but this has to be supplemented by additional T cells becoming regulatory T cells outside the thymus. If during this developmental process some T effector cells which can react against our own tissues survive and have the potential to become activated; as well as T regulatory cells of either sort losing the braking activity necessary to control effector cells, then there is a basic substrate for the development of autoimmunity. In our first 2 decades the immune system learns about the environment analogous to what happens in the brain – a process called “tuning” the immune system. This process has a significant effect on the ultimate effectiveness of regulatory cells, and particularly so-called “induced” regulatory T cells.

HOW T CELLS LEARN TO RECOGNIZE SELF AND FOREIGN ANTIGENS

In the case of MS, many genes which control the immune system, with normal but with slight variations which are inherited, interact with various environmental factors to produce a degree of imbalance in the ability to control the immune response to myelin antigens (proteins) which we know are recognized and incite the immune attack which characterizes MS. Dysfunction of the regulatory T cell has an essential role in allowing the immune attack to proceed. 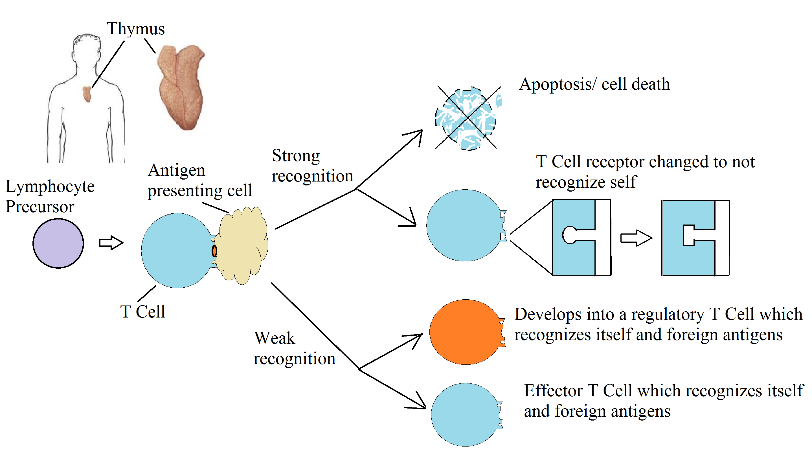 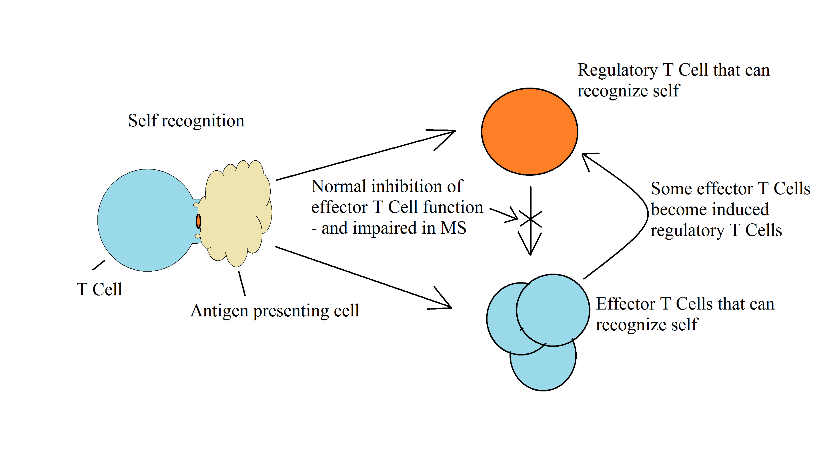 Later, I will deal with the specifics of how each of the factors listed above interact with T cells. Suffice to say, they all have an effect on the functional capacity of regulatory T cells, and particularly induced regulatory T cells. Many of these influences essentially tip the balance towards immune over-reactivity to myelin on an established genetic background.

The work we have done so far has developed a paradigm which will allow us to investigate the multiplicity of genetic and environmental influences on regulatory T cells (particularly induced regulatory T cells) in this immune balancing act. I am convinced that we can make sense of all of these varying influences on the immune system which can result in MS. Through this work I think we will also have a very good handle on the actual molecular mechanisms inside cells which are important to the development of MS. I strongly believe that we will never fully understand what goes on in MS unless we study this disease in the humans who get it. This essentially requires investigating immune cells derived from the blood, where they circulate. In addition, we have a strong interest in how immune therapies affect this imbalance in MS so that we can not only understand how effective therapies work but learn how to develop new therapies which are specifically targeted to MS rather than being more generically effective in autoimmunity.

Please continue to support our research by clicking on the DONATE NOW button (using Paypal) on our website or by mailing a check payable to MS Research Institute. We are a 501(c)3 Federal Tax ID # 20-1354368 and all donations are tax –deductible to the full extent provided by law.

Signup for our newsletter and receive updates on MSRI fundraising and research activities.